Back to Bobcat News

Bobcat Equipment South Africa, part of the Goscor LJ Group, is set to leverage its main complementary brands to drive growth in the rental and aftermarket segments, according to Barry Owen, the company’s new managing director.

With over 100 machines on rental in the Johannesburg area alone, Owen says it’s his responsibility to make sure the number keeps on increasing. One of the ways he intends to do that market is by ensuring that the company’s service department maintains top-notch standards.

“Our aftermarket proposition is the most important part of the business. This has to be world-class in order to attract customers who buy or rent machines from us to continue to do so, and to entrust us with all of their maintenance and service requirements,” he says.

In addition to perennially popular products such as Bobcat skidsteer loaders, the company also offers excavators, front-end loaders, and road equipment such as graders and rollers from Sany, a major Chinese OEM.

To date, Sany excavators have been available up to 33,5-ton machines, but the company recently took delivery of its first 50-ton model from the Chinese principal for use in a mining application.

Owen says that the perception about Chinese equipment being inferior in terms of build and component quality has changed dramatically. The brand is about to launch an 80-ton excavator onto the international market, one of the largest available.

“Sany is an interesting challenge because it comprises such magnificent machines. How do you provide the necessary aftermarket support in order to uphold its reputation in the industry? There is no longer an issue of Chinese-made equipment being inferior to other brands from major OEMs,” Owen maintains.

In terms of target markets, he says the construction sector is among the biggest on which Bobcat focuses, though surface mining and civil infrastructure projects also play a significant role. “Our policy is not to have all our assets in a single basket, but to focus on multiple applications, including niche sectors such as agriculture.”

Looking at the rental side of the business, Owen points out that Bobcat skidsteer loaders continue to dominate, in addition to related equipment such as telehandlers, mini-excavators, and tractor loader backhoes (TLBs).

Owen believes that the downturn in the construction and infrastructure sectors has bottomed out, though he says there is unlikely to be a rebound this year. Despite this, he remains optimistic about growth for the company in the short- to long-term.

“Personally, I am quite excited, as there remains a lot we can do to improve our business, which will translate into a pretty good year for us at the end.”

While challenges include the recent financial downgrades impacting on access to affordable financing for customers, Owen says the company has focused strongly on cost-competitiveness in order to best serve market needs with premium, yet affordable, equipment.

In this regard, being part of the larger Goscor Group gives the company an edge. “The Goscor Group is an impressive, well-run, well-established organisation with exciting brands. In addition, it has a progressive corporate culture that thrives on successfully meeting challenges”, says Owen.

The Goscor Group, in turn, forms part of the blue- chip InServe, which itself contains companies with construction applications, amongst others. ”A construction site requires scaffolding, cranes, earthmoving equipment and access equipment, which gives us the opportunity to leverage both the Goscor Group and InServe to best exploit our synergies in being able to offer complete solutions at the lowest total cost,” he explains.

On the sales front, the potential exists for the cross- selling of complete solutions to major customers as single service offerings. “Apart from our different businesses talking to each other, there is a lot of system and process overlap.

“For example, how do we optimise our technicians in order to maximise their productivity? Obviously, we also have access to capital, being part of InServe, while in the longer term there is the distinct possibility of further acquisitions, in order to answer the question of ‘where to next,”” he says. 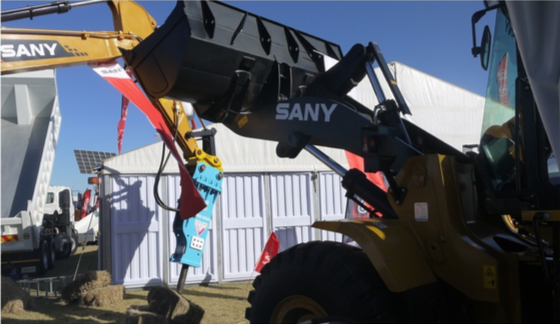 FacebookTwitterLinkedInGoogle +Email
Back to Bobcat News

This website uses cookies to improve your experience while you navigate through the website. Out of these cookies, the cookies that are categorized as necessary are stored on your browser as they are essential for the working of basic functionalities of the website. We also use third-party cookies that help us analyze and understand how you use this website. These cookies will be stored in your browser only with your consent. You also have the option to opt-out of these cookies. But opting out of some of these cookies may have an effect on your browsing experience.
Necessary Always Enabled
Necessary cookies are absolutely essential for the website to function properly. This category only includes cookies that ensures basic functionalities and security features of the website. These cookies do not store any personal information.
Non-necessary
Any cookies that may not be particularly necessary for the website to function and is used specifically to collect user personal data via analytics, ads, other embedded contents are termed as non-necessary cookies. It is mandatory to procure user consent prior to running these cookies on your website.
SAVE & ACCEPT